We’ve looked at three of society’s four major goals for its macro economy, which means we have one goal left: short-run stability.  The issue of the stability and predictability of growth from month-to-month and year-to-year in an economy is the “business cycle”.

Learning Objectives for this unit:

Earlier we looked at the issue of growth in the economy.  We decided that a society wants an increasing amount of goods and services, and so growth in real GDP was our first major macro economic goal.  But there are good ways to grow and not-so-good ways for an economy to grow.  The history of all market-based economies shows that while most economies grow from year-to-year, they clearly don’t always grow at a constant rate.  Some years result in rapid, fast growth, while other years result in little or no growth.  Sometimes economies don’t grow at all and actually shrink.  That is, they produce a smaller amount of goods instead of a larger amount.  Fortunately, positive growth happens more often than negative growth (fewer goods).  This tendency of capitalist, market-based economies to sometimes grow and sometimes shrink is the business cycle.  It is sometimes also referred to as a boom-and-bust cycle. 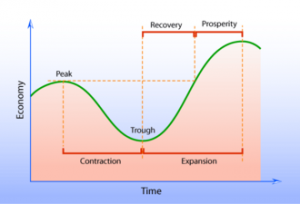 What economists refer to as the “business cycle” is, in fact, this tendency of market-based economies toward inconsistent growth, including occasional negative growth.  A simple graph of real GDP over time reveals this up-and-down tendency.  What we call the “business cycle” is the perception that economies repeat this up-and-down tendency.  Economists have given names to the various phases of the business cycle as shown in this stylized diagram/graph of a hypothetical economy.  A contraction that lasts for at least 2 consecutive quarters (6 months) is often called a recession.  The green line going up and down is supposed to represent the total amount of real GDP over time.  This particular diagram is highly stylized in that in real-life, economies usually spend more time (years) growing (going up) than they do shrinking (declining).  In other words, contractions tend to be short-lived and measured in a few quarters of a year, while expansions tend to be longer-lived.  Indeed, in the over 60 years of modern U.S. experience since World War II, the average contraction period has only been 8-9 months long, while the expansions are measured in years.  The three most recent expansion periods have averaged approximately 6-8 years long.

Roller coasters may be interesting and fun rides at an amusement park (though not for me!), but when it comes to the economy, most people think stable and predictable is best.  One of the most negative aspects of an economy experiencing the business cycle is that the cycle is itself unpredictable.  It’s bad enough that real GDP declines during the contraction phase.  But what really makes the business cycle an undesirable phenomenon is that it is so unpredictable.  We never know when the contraction or decline is coming. We never know in advance how deep the contraction will be.  We never know how fast we will recover.  The business cycle makes it difficult for business people and ordinary consumers to plan their lives.  The uncertainty created by the business cycle means people don’t whether to spend now and invest and take risks, whether it’s smarter to wait and save money for a “rainy day” when they lose their jobs or profits in the next recession.

Our last major macro economic goal, then, is to avoid the extreme ups-and-downs of the business cycle.  Ideally, we want macroeconomic policies that help us avoid ever having a contraction or recession.  Unfortunately, history demonstrates that despite such an ideal outcome is out-of-reach.  Indeed, it is often remarked among economists that one of the surest signs that a contraction is imminent is that financial advisors on Wall Street and government advisors begin suggesting that we have “permanently ended the business cycle”.  One leading Wall Street economist stated in early 1929 that the economy had achieved a new “permanently high plateau” of performance.  Unfortunately for him, his remarks came only weeks before the stock market collapsed and the U.S. entered the Great Depression, the worst and longest recession in U.S. history.

What’s a Recession? What’s a Depression?

Technically, any decline in real GDP and the real economy, no matter how long, is called a contraction.  If a contraction lasts for a prolonged period, a group of academic research economists will “officially” declare the contraction to be a recession and they will identify the “official” starting and ending months of the recession.  The definition of what is necessary for a contraction to be “officially a recession” depends upon the country.  In many countries and in the U.S. until 1978 a “recession” required at least two consecutive quarters (6 months) of declining GDP.  In the U.S., though, the definition changed in 1978 to “a period of prolonged, broad-based economic decline as evidenced by several indicators”.  In other words, even though real GDP might not technically decline for 6 consecutive months, if all the other indicators of economic activity such as employment, consumption, investment, and industrial production are declining, then a “recession” is declared.   The original purpose of identifying recessions was to make economic research easier by having all economists call the same time periods a recession, instead of having economists doing research with differing dates.  However, the term eventually became popular on both Wall Street and with politicians, with both these groups often not understanding it.  For example, politicians currently in office like to promote the idea that we are “not in a recession”.  But, by definition, we can’t possible know we are in a recession until we’ve already been in it for at least 9 months.  Of course, by the time we know we’re “officially” in a recession, we’re usually out of it.

Historical Evolution of the Business Cycle

Remember our goals for a macro-economy:

A good macroeconomic system is the one that can (and does) achieve these goals better than other systems. Historically, the record of the last 250 years of world history is clear. economies that are mostly, or at least partly, market-based have done the best towards these goals. However, the record is far from unblemished. As market-based economies grew through the Industrial Revolution, they achieved huge increases in growth – real output soared. But it seemed that the business cycle worsened. Market-based economies have been prone to up-and-down, boom-and-bust cycles throughout the past 200 years. At times, there have been periods of high unemployment. At other times, high inflation or even deflation. And a few times, such as The Great Depression, it seemed that a market-based economy might fail completely.

The Business Cycle Is A Battleground For Economic Theories

Concerns about the first three goals, growth of GDP, price stability, and full employment, come together when focusing on the business cycle.  Obviously the long-run growth rate of GDP is really the compounded series of short-term growth rates.  But it’s more complex than that. Historical evidence (along with considerable theory) indicates that high growth for prolonged periods can bring inflation but will eliminate unemployment.  The reverse is also true. If growth is too slow or even negative, then unemployment rises but inflation is unlikely.  It’s worse if deflation happens since deflation triggers its own debt deflation-depression-high unemployment cycle.

Historically there has appeared to be a trade-off between high unemployment with low inflation vs. full employment with high inflation.  Since stabilizing the business cycle at an acceptable level of growth involves all of our macroeconomic goals, it is the primary focus of most macroeconomic theories. Economists of different “schools of thought” have been debating the causes and dynamics of the business cycle for 200 years with little agreement.

Evolution of Theories and Economies

Macroeconomists seek to do more than understand what’s happened.  They seek to provide coherent explanations of how the macroeconomy works and provide policy recommendations to government and society for how to achieve our goals. As if this weren’t already a complex enough task, we have to add that the economy itself, its structure, behavior, and institutions, change over time.  A hundred years ago most major economies had money systems that were defined and backed by a physical commodity: gold. Since 1971, no major economy has such a money system.  A hundred years ago, most firms very small and run by owner-entrepreneurs.  Today, huge corporations run by hired managers employing tens and hundreds of thousands of employees dominate our economy. Economists need to constantly change and revise (though few do) their theories to reflect these changes in structure and performance. Theories have evolved in response to changing economies (although often they evolve too slowly).

Economists are often an argumentative and egotistical group (yes, I’m guilty as charged), so it’s not surprising that there are numerous theories of the business cycle and macroeconomics out there.  Indeed, one member of the British parliament once remarked that there are likely more theories and opinions than there are economists since undoubtedly “Keynes would have at least two”.  Joking aside, though, I am going to try to help you deal with the numerous theories by helping you to understand:

This unit wraps up our study of the structure, circular flow, goals, and measures of an economy.  At this point, we should know what we want our economy to do. We just don’t know how to make it happen or what the dynamics are.  In the next unit, we start the second part of our course: the study of simple models and theories of the real sector.  We’ll introduce our primary graphical model as tool to analyze the reactions of the economy, but we’ll primarily focus on the battle between Classical and Keynesian theory.